This tip will help you greatly improve your learning skills.
It can be also useful for giving more powerful presentations.

It comes from the bonus ebook Learning to Learn Effectively from my Premium package of Mastering Vim Quickly.

… If you knew you had a meeting later today with your boss to talk about what you’ve learned from this book, you’d approach this information completely differently.

Whether you read or listen to some information, if you expect to replay it back, your approach in consuming this information would be completely different.

Your mindset would be different.

You would not just “read a book,” “listen to an audio,” or “quickly checkout this video.” Instead, you’d catch yourself collecting facts in some way.

You might be writing notes, or trying to remember crucial points.

So if you approach learning with the intention of repeating it back very soon, you’ll notice right away that your mindset is different.

Now, try to compare that kind of mindset, with the one you have when you’re reading a novel. It’s totally different.

Use this approach to learn effectively. If needed, even consciously trick yourself into the expectation that you will need to repeat what you’re trying to learn.

It would be even better if you actually plan to teach someone what you have learned.

In case of Vim, you might try to teach your coworker something about Vim.

Or, at least, you could try to write a blog post about what you’ve learned (and do this without checking back at the original learning resource!).

This will help you remember what you’ve learned, and show you where your gaps are, so you can grasp what to read again…

Simple, yet so powerful!

Try it, and see for yourself.

As the author of Mastering Vim Quickly I sometimes get various Vim related questions from my readers.

Much more often I get emails from my subscribers at masteringvim.com where I share free Vim tips.

Although this command is very simple, my experience showed that a lot of people are not aware of it. So it’s time to try to change that :)

Yesterday I was contacted by one of my readers – and as always, I try to answer my readers as soon as possible.

As you can see from the screenshot, he needed to get from this

He knew that there must be a better way, than going to Insert mode, and using arrow keys and Backspace. And there is.

The solution to this is simple – put your cursor anywhere on the line where lang, is, and hit J (Shift+j). That’s a join command. For more info see :help J

So, whenever you want to merge two lines into one, position the cursor anywhere on the first line, and press J to join the two lines. Simple as that :)

There are a few simple lessons I learned after reading all of those.
They might seem too obvious, but aren’t all the great truths simple?

Anyway, here they are:

“In my whole life, I have known no wise people (over a broad subject matter area) who didn’t read all the time—none. Zero. You’d be amazed at how much Warren reads – and how much I read. My children laugh at me. They think I’m a book with a couple of legs sticking out.”

Charles Munger, the billionaire business partner of Warren Buffett and the Vice Chairman at Berkshire Hathaway.

2. Hmm… this is cool. I want to see other interesting features this thing has.

4. The worst thing about Vim… 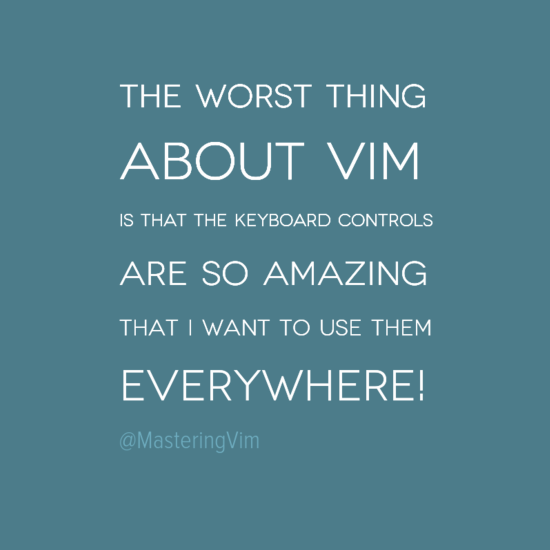 5. I’m actually a wizard… and this is how I feel when someone sees me using Vim

Over the years, Vim got a reputation that it’s really difficult to learn it. I’ve heard many times from guys who are convinced it will take them months to reach proficiency. That’s simply wrong.

That’s why I wrote a book: Mastering Vim Quickly (from WTF to OMG in no time) which will teach you Vim the way I learned it – easily and quickly.

If, for some strange reason, you don’t know what Vim is, here’s the short answer:

Vim is a highly configurable text editor built to enable efficient text editing. It is an improved version of the vi editor distributed with most UNIX systems. Vim is distributed free as charityware.  – http://www.vim.org/

You should also know that Vim (a contraction of Vi IMproved) is a text editor written by Bram Moolenaar and first released publicly in 1991. Based on the vi editor common to Unix-like systems, Vim is designed for use both from a command line interface and as a standalone application in a graphical user interface.

The History of Vim

When Bram Moolenaar had bought an Amiga computer, he wanted to use the editor he learned on Unix. Since there was no good Vi for the Amiga, he started with the best that was available (a program called Stevie) and started improving it.

At first, his goal was to imitate Vi. Later new functionality was added, and  by version 1.22 Vim included more features than Vi. That time it was renamed from Vi IMitation to Vi IMproved. Over time the gap has grown wider, now it’s hard to think of a reason to use Vi instead of Vim. I would recommend all Vi users to switch to Vim.

Of course, ports to various operating systems have been done by different people. The port to Unix was a milestone, since Vim started competing with Vi. Currently Vim runs on more than a dozen different operating systems. That is awesome indeed.

Vim was made such that it works on many different operating systems. This wasn’t easy. Just supporting the most popular Unix versions is already a big task. Adding support for MS-DOS and MS-Windows gives the additional problem of using file names with a backslash in them. Machines such as the Amiga and the Macintosh have a different kind of operating system, which require specific solutions. – Bram Moolenaar for Free Software Magazine

The first version of Vim that was released to the general public was 1.14, which was published on November 2, 1991. Over time Vim has grown constantly. It has become a complex program. Adding functionality is taking much more effort now than before.

Here’s the timeline of Vim development:

The list shows only the most important features, but each version brought us a lot of nice features. For example, if we take version 6.0: the major new feature was folding. But, there were other great features such as UTF-8 support, multi-language support (translated messages and menus), vertical window split, improved performance for syntax highlighting, etc.

Vim has grown to an big open source project, but it’s also important to mention that it’s charityware. The basic idea with charityware is that everybody who uses Vim is asked to donate to a charity. Thus the use of Vim is free, if you think it’s worth something, you can give that money to a good cause.  Moolenaar helped with establishing a foundation called ICCF Holland that works to support to a children’s center in Uganda.

Unlike the other vi clones, Vim is still actively developed and has a large base of contributors. New features are still being developed and added to the text editor every year, making it even more powerful. Besides that, number of Vim plugins is rapidly growing.

At the moment, Vim 7.4 is the latest stable version. It is highly recommended to update your Vim if you didn’t, because many bugs have been fixed since 7.2 and earlier.

Vim has been my editor of choice since 2008, few months after Linux became my main desktop operating system. In a meanwhile, I have changed few different distributions of Linux, but Vim was always there.

I’ve used it to write many lines of code, edit lots of configuration files, and write tons of documentation. Although I’ve tried to use some of the modern text editors, I haven’t found any that match Vim’s efficiency.

I’m not the only one who, after using Vim almost every day for so many years, is still discovering new features, capabilities, and useful tips that further improve my productivity.

At the moment, my favorite work environment is Gentoo with i3 window manager, oh-my-zsh and Vim. I have never been more productive.

Over the years, Vim got a reputation – that it’s really difficult to learn it. I’ve heard many times from guys who are convinced it will take them months to reach proficiency. That’s simply wrong.

That’s why I’ve started to write a book: Mastering Vim Quickly (from WTF to OMG in no time) which will teach you Vim the way I learned it – easily and quickly.

Then, setup and generate a cerfitecate for the web server:

You’ll be asked to enter a pass phrase.

You’ll be asked for the pass parse you used in the previous step.

This command generates the certificate you will be asked to fill in some details:

The certificate now need coping in to the SSL directory:

The web server needs to be restarted for the change to take place:

Now, you should now be able to access the server by typing https://ip_address in your browser.

You’ll get a certificate warning about it not being from a trust source you need to click on more details to check that it is the right computer you are connecting to.

You need to create a directory to share. For example, it can be in /home/user:

We need to give the web server and the user access to the WebDav directory:

Create a directory where you will store your password files:

Create the password file like this (WebDavCloud is the AuthName, and user1 is actual username for accessing the WebDav):

You will be asked to type in a password. Select a strong password, you will use it for accessing to your WebDav directory.

Now we need to edit the default-ssl config files:

You need to find the part of the file that says:

Now you need to restart the Apache:

You should now be able to access the WebDAV folder by going to https://ip_address/webdav

Note: If you would like to map your WebDav directory as a network drive from Windows, it’s most likely that you will have big problems. If you want to use WebDav from Windows, you will need to buy a commercial certificate and use it instead of self-generated certificate.